Have you ever felt that Skyrim lacks age variations? Well i have found a way to solve this. Every city, town, village will now have teenage boys and girls, mostly custom armors, custom body's, custom textures, Custom voices, Custom outfits to fit the new body's. While traveling you will find a total of 228 teens, a few will love to accompany you on quests, some are Friendly and (yes, you guessed it) Sassy! Obviously, my initial intention was to expand "Sassy Teen Girls" as we all watched that mod disappear. but after messing with everything, I had realized, nothing of the original mod was left, so this was greatly inspired by the long gone mod.

- German Translation by Rore
- French Translation by Abaddon
Features:   - Followers all have Full immersive AI.   - Many variations of sizes and looks, even has 3 new races seen in previous Elder Scrolls!   - Designed to be compatible with as many other mods as possible.

Please, if you have any questions, comments, bugs, go to my Discord page where my team is there to help.

After installing the mod, the following general load order needs to be followed:Skyrim.esmUpdate.esmDawnguard.esmHearthfires.esmDragonborn.esmUnofficial Skyrim Special Edition Patch.espTeenDolls.esm(All your other crazy mods)Sassy Teen Dolls.esp
OR
Sassy Teen Dolls - (Lite).esp
OR
Sassy Teen Dolls - (Females ONLY).esp
TeenDoll - (Any and\or all Replacements)
TeenDoll - (Any and\or all Followers)(Any other mods that alter the Follower Interface, Like AFT for example)For getting load order set with other mods loaded, please use LOOT. It will provide you a solid starting point for everything that you can then tweak as needed.

There is Four steps to this FOMOD

Step 1.
- This will basically install the framework, no options are given

* I am Aware "Dynamic Vampiric Appearance" is only for LE, i ported it and made it for SE, and the one here is Made specially for the teens. Your welcome.

There is a Lewd addon inside my club here on the site. There is also some body replacers and physics addons. Feel Free to join the club and get them. CLICK HERE! 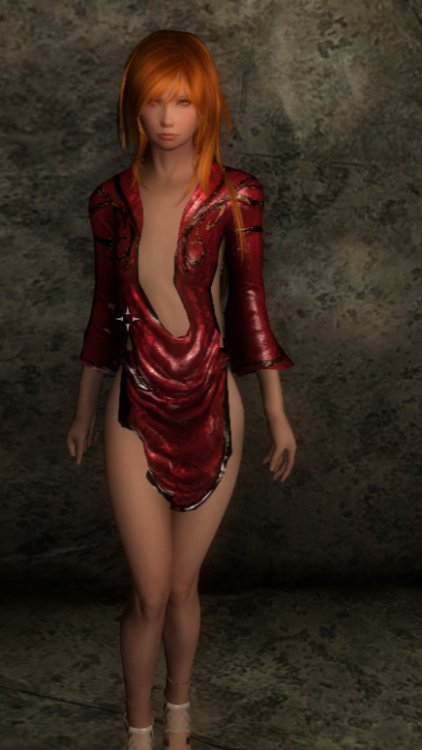 Special Thanks     I wanted to make sure I gave credit where its due, I feel that without the help of Ezra, none of my mods would be possible. Even though I made, sculpted and put everything together, he went through every single NPC and made sure every one of them were unique in every way. he picked out which one wore what armor, what they had in their inventory. Again Ezra, this mod feels like its just as much you as me.

===== 1.5.2 =====
- Translations and iAS will need to be updated!
- Fixed the fix for High Poly Teen Female Khajiit Head
- Fixed inconsistencies between races and their vampire form

===== 1.5.1 =====
- The Racemenu patch now works! All sliders are now available if you're a Teen and you selected the racemenu patch in the installer
- Fixed High Poly Teen Female Khajiit Head, previously the neck was caved in

===== 1.5 =====
- Translations, iAS and any teen replacer or additions will need to be updated!
- Changed the Teen Head to a high poly, this has pluses and minuses. The pluses are that the teen has a higher poly head and looks much better, and it also fixed the neck seam. One minus is that that all teen npc addons need to be updated, we are working on updating all of them. And another is that Racemenu and ECE sliders do not work for teens anymore(vanilla sliders still work), it is possible to fix the racemenu sliders, but we are running into issues. ECE sliders will probably never receive support to work for teens.
- Fixed crashes when playing as a teen dremora race and its vampire counterpart
- Updated Racecompatabilty patches to include those fixes
- Cleaned the esm and all esps
- Fixed height weirdness
- Added ENB Brow Fix to Teen players, next update it will be added to NPC's
- Edited eyes meshes to be more natural
- Fixed neck gap
- Fixed eye clipping on females
- Fixed dremora face mask (horns)
- Fixed Teen Assassin outfit, multiple parts were not working
- Replaced all BSA so that they separate textures and other stuff for compression
- Fixed some classes in the sassy teen dolls full esp
- Added protected Teens option so that only the player can choose to kill them
- Added esl flag to follower or replacer plugins that are in the supported esl range
- Fixed Hider plugin so that she uses the USSEP package
- Fixed Wednesday Addams hair location, can now be used on player
- Fixed all heterochromia eyes so that they work with sliders
- Multiple internal changes to the fomod
- Renamed a few follower and replacer plugins so that they are more in line with everything else
- Probably other stuff I'm not remembering
Mods that will need to be updated to work with the new Teen Dolls:

===== 1.4 =====
- Added Racecompatability Vampire System(Requires RaceCompatability), it is suggested to use this on as it is compatible with most vampire and race mods
- Moved regular vampire system to a separate plugin
- Fixed both Better Vampire patch and Teen + Doll Better Vampire patch
- Fixed Dolls patch to include the new Doll races
- Moved the heterochromia eyes over to this plugin and added over 150 more
- Installer now auto selects your vampire patch based on your mods
- Added TeenDolls - Vampire Lord to the installer
- Added TeenDolls - Beyond Bruma, adds 9 teens to Bruma
- Rebuilt outfits, fixed physics bugs, maybe introduced some outfit clipping
- Allow you to select none when you choose a Sassy Teen Dolls plugin
- Tweaks to the installer, should error less often.
- Includes outfit fixes for compatibility with iAS