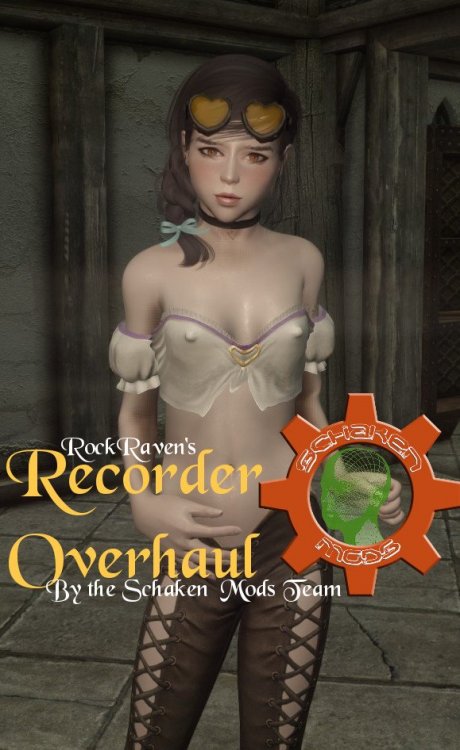 Record 2R22: Dragons have returned to Skyrim, and chaos has enveloped the land.
Civil wars, political corruption, and dreadful monsters plague this nation, and sentiments such as hope, love, and happiness are fading.
However, in this darkness, a hero arises, and with the might of a dragon and a will, unbroken and unbound, fights to preserve the future of Skyrim.
But who will keep the hero’s story preserved?

Who is Recorder?
A student from a mysterious academy, Recorder has been sent to Skyrim to record the Dragonborn’s adventures. She awaits in Riverwood, inside the Sleeping Giant Inn. She’s quirky, has an interesting sense of curiosity about Skryim and the Dragonborn, and all in all, a fun companion! When it comes to combat, she has a strange affinity for fighting and seeing blood causes a tic in her to go (slightly) insane. But don’t worry, she won’t turn that psychotic-ness against the Dragonborn…hopefully.

More Back Story
As a member of a mysterious academy (location unknown), "Recorder" has a mission: to observe and keep records of heroes' journeys. However, not just heroes of a particular world, but of a variety of realities (in other words, the different "games").
Each "reality" has a world (e.g. Hyrule, Thedas, Gaia, outer space, etc.), the hero, and a calamity. How the academy came to acquire such  ability to warp through these dimensions and to what purpose the recordings serve cannot be revealed due to "protocols". In her current mission, "Recorder" has been sent to this world, Nirn (or more specifically, Skyrim) to record the hero's (the dragonborn) journey, and his/her is destined fight against the calamity facing Skyrim (the return of Alduin and the dragons).
Now, on to her name... YUP! You guessed it. Recorder is not her real name. Due to protocols preventing her from revealing her true identity and to keep the threats to her mission at a minimum, "Recorder" will first introduce herself as the title of her job, which is to be a recorder of the Dragonborn's adventures.

However, it may be possible that circumstances may change, and she may have to reveal more secrets to the Dragonborn in order to complete her mission... FUTURE QUEST MUCH!? MUAHAHAHAHA 8D! (I don't know what that evil laugh was for, sorry OuO;)

Features:
- Over 700+ recorded lines
- Based on own follower system (still should work with AFT, EFF, and UFO: check below for solutions)
- Fleshed out Romance Questline (in the works) + "Lover" option (not quite marriage)
- Quest line in the works! (Currently first quest out) With more to come!
- Has her own horse, Epony (hehe get it GET IT??
- Summon spell for Recorder
- Added summonable robot companion Omnico for storage and fighting assistance
- Commentary on major holds and various locations(e.g. High Hrothgar, Jorrvaskr, Blue Palace, Riften Orphanage, etc.)
- Various taunts for different types of enemies
- Six songs to sing anywhere and anytime (custom songs included!)
- Morally… HA! What are morals,she’ll do anything >:D
- Essential follower skilled in dual wielding, archery, and sneaking
- An interesting time