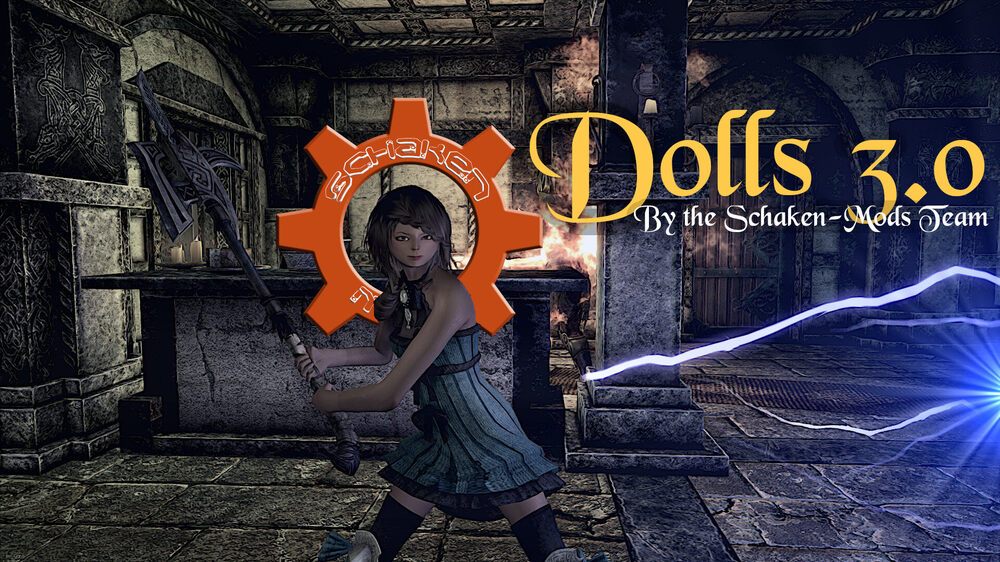 Have you ever felt that Skyrim lacks Kids? Well we have found a way to solve this. Every city, town, village will now have  boys and girls, mostly custom armors, custom body's, custom textures, Custom outfits to fit the new body's. While traveling you will find a total of 120 Dolls not including the patches, a few will love to accompany you on quests, some are Friendly and some are not! Obviously, my initial intention was to expand "Dolls" as we all watched that mod disappear. but after messing with everything, I had realized, nothing of the original mod was left, so this was greatly inspired by the long gone mod.


There is Three steps to this FOMOD

(All your other crazy mods)


(This is where the Patches will go, at the end!)
(ONLY SELECT A PATCH IF YOU HAVE THE OTHER MOD!)


(These are your Add-on patches)

(All your extra Dolls go here)

Lolita battle doll is a little project of mine. if you have Bodyslide then you can open it up, and search for "Dolls SE - Lolita the Battle Doll".
Open that and you will see Lolita. you can move the sliders and customize her head however you like and select the "Build" button, and she will appear in game like that now.

IF you have any questions, you can refer to this video I made on it.


I took the time to do alot of editing to them and not just the looks. While you roam thru the game you will find kids and enemy camps, you will find kids that want to be explorers. and the adoptable kids, they will come fight at your side as well. I tried hard to make this game as realistic as possible.
If you have any questions, comments, or suggestions, please reply to:
Discord == Schaken-ModsChat == Steam

I wanted to make sure I gave credit where its due, i feel that without the help of @Ezra1975, none of my mods would be possible. Even though I made, sculpted and put everything together, he went through every single NPC and made sure every one of them were unique in every way. he picked out which one wore what armor, what they had in their inventory. Again Ezra, this mod feels like its just as much you as me.

Also i would like to thank IdioticIdiot as he was the person that inspired me to ever even think about making mods, and he gave me permission to port his mod, then after adding to it, he said all that i done can be mine and im really greatful there is modders out there like him.